In the production of round bales, every farm owner knows for a fact that there are two preferred aids. The first one is the traditional twine, while the second is the net wrap. While the option you go depends primarily on what is more convenient to you, there is no denying that a net wrap has more benefits up its sleeves. So, we will examine what those benefits are and figure out if a net wrap deserves to replace the traditional method of using twine. 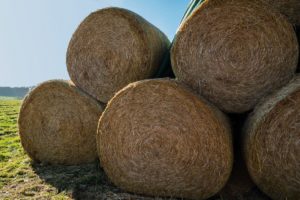 1 – It leads to faster baling.

Arguably the most prominent benefit of using net wraps for baling is that it only takes a maximum of two and a half turns to wrap. With a machine set to use net covers, you can create significantly more bales compared to when you use twine. So, when the bailing process becomes faster, you expect to cover more work, provided the weather is conducive and favourable. Likewise, using net wraps also leads to saving money on fuel and labour costs.

It no longer is a secret that with the use of net wrap in large-scale farming, there is an expected surge in the bailing process, naturally leading to much-improved productivity. For years, farm owners have been looking for a solution to speed things up, and net wrapping gives them precisely what they need.

3 – It also reduces losses in baling.

Every farm owner understands that baling losses are a reality they must accept. However, it does not mean you give in to the usual losses you face every single time. Since you spin the bale a few times in the chamber as you wrap it using the net wrap, what happens is that there is a minor leaf that drops out of the bale, thereby efficiently reducing the likelihood of baling losses.

Perhaps the most significant challenge for farm owners when it comes to storing food for their animals is spoilage, especially when they have to resort to outdoor hay storage. Storing hay outdoors was the practice in farms for a very long time, especially for large-scale farmers. It is possible to save hay in shaded areas, but it would need a lot of housing for large-scale farms. Meanwhile, the use of net wrap solves the predicament since the cover has natural water shedding capability, which means you can store vast amounts of hay and preserve them outside and without the need of shade or shelter.

So, if you find it doubly tricky when it comes to storing and preserving hay and other animal food in your farm with the use of twine and other covers, you must consider the switch to net wraps sooner than later.